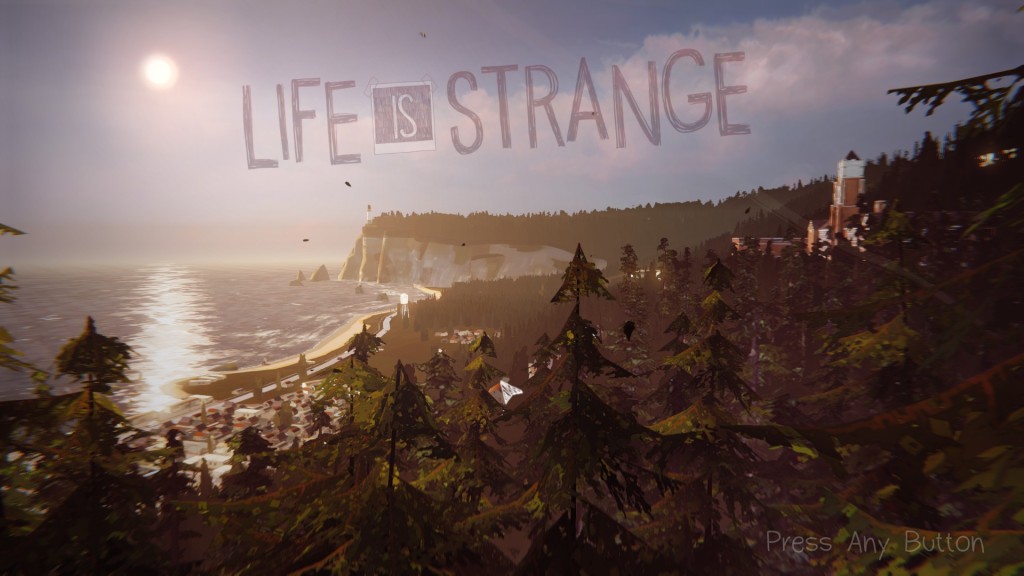 I have recently kinda fallen in love with a video game called Life Is Strange.
The Youtuber Jacksepticeye has been playing the game as each episode has been released on Steam. I did not see him play the first one, but I saw Episodes 2 and 3.

I decided after seeing Episode 2 I wanted it and as soon as I got some credit on Steam it was one of the first games I bought. You can get the first episode quite cheaply and then if you are interested download each episode as it is released, or buy a Season pass that will automatically download each episode to your computer as they come out. Episode 4 came out on Tuesday but I havent yet played it, and I refuse to watch Jacks video until I do! I want to be surpised! 😀

Anyway so I hadnt seen episode one but I had an idea of the story from the next 2 episodes that I had seen.

In the game you play a girl called Max who has moved back to her old hometown of Arcadia Bay to attend a high school (i think – maybe its a college – its a bit odd – it has dormrooms and the kids you are seeing are all 18 but otherwise it looks and seems like a high school). The reason she has returned there is she is interested in photography and one of her hero photographers is teaching at the school.
At the beginning Max has this weird dream where it looks like a huge tornado is taking out Arcadia bay. She wakes up in the middle of photography class and is a bit disorientated.

The game play to start with is kind of point and click. As you go near a person or object you can interact with words will appear above it – you click your mouse and move it towards the word (or an option if there is more than one). 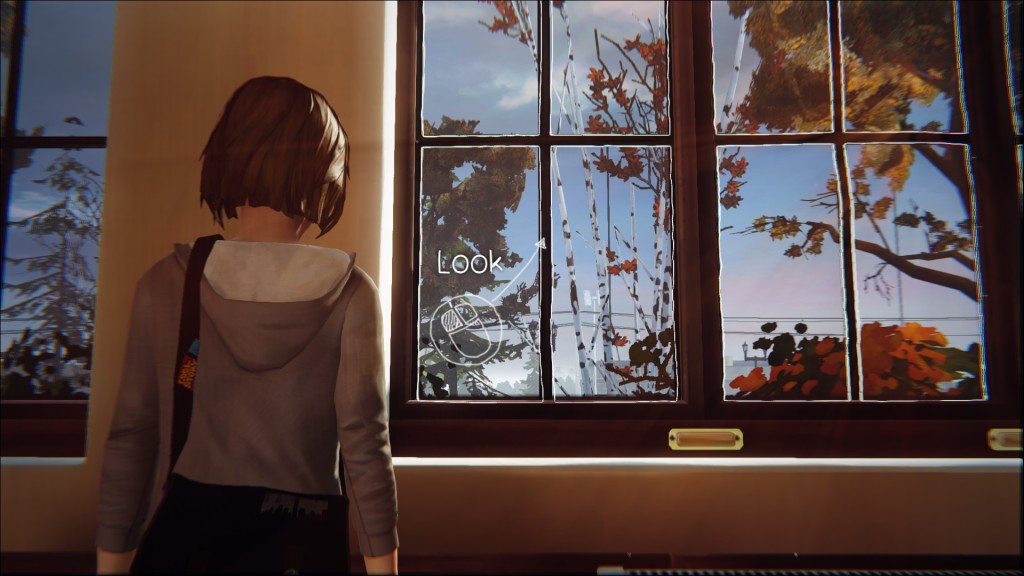 After class Max goes to the bathroom (this is usually after you have fully explored the hallways) and while hidden sees some looney male student pull a gun on a blue haired girl and shoot her. Max does something and somehow suddenly appears back in her classroom at the same point she was at when the dream ended previously.

She discovers that the class follows the same pattern as it did the first time around, so after class heads back to the bathroom to see if she can save the girl (this girl later turns out to be Chloe – Max’s childhood best friend). She does and discovers she has the power to turn back time. This is a main part of the game play. Because Max has this ability – the choices she makes from then on will influence other aspects of the game. There are small decisions and big decisions. An example of a small decision in the first episode is agreeing to sign a teachers petition about not allowing survelleance cameras in school. An example of a big decision in this episode is at Chloes house later you can choose to intervene or not when she is being harrassed by her step father. 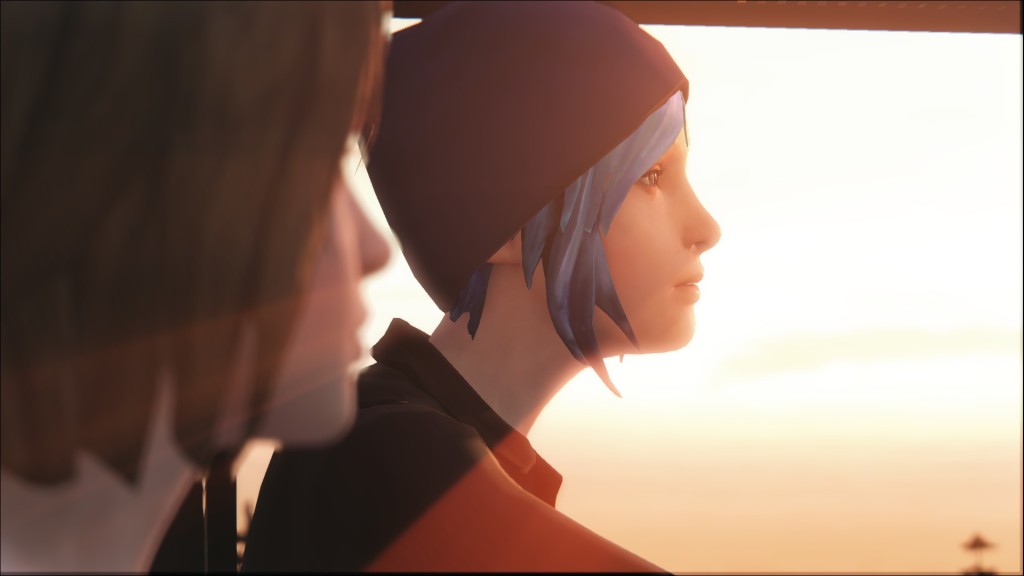 At the end of the episode Max and Chloe are together at the lighthouse where Maxs dream was located. She has what she realises is a vision – at the end of the week a tornado will hit Arcadia Bay. She begins to tell Chloe about what has been happening to her and it starts to snow – a completely freak weather happening for where they are and the time of year. 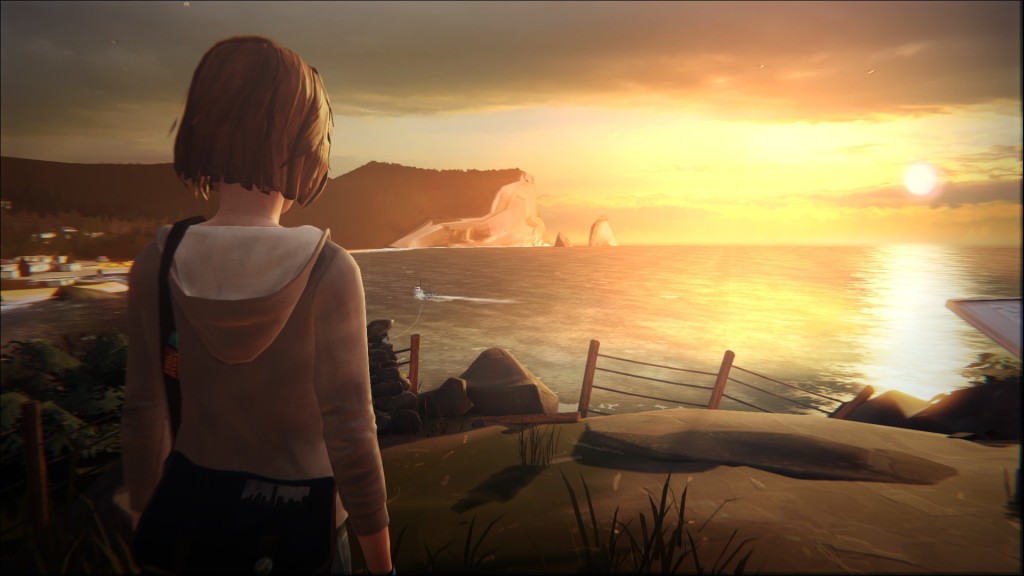 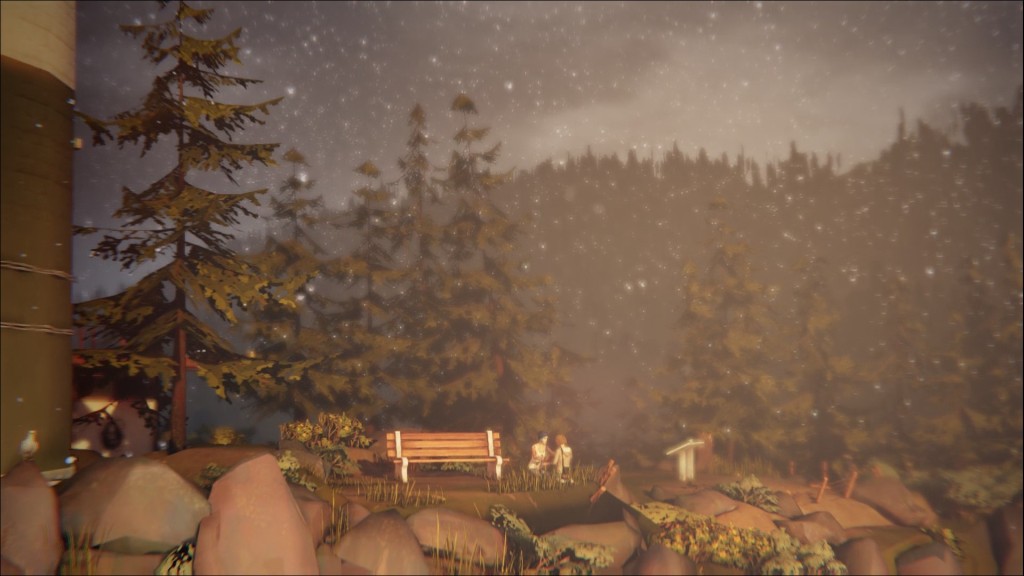 As you can see from the screen grabs – the scenery is stunning!!! The team that worked on this, DontNod, did an amazing job. I also love the point and click style – the text they use and Maxs journal that keeps track of what she has discovered is an art journal – everything gives it a lovely artistic vibe that I really enjoy. The music is also fantastic – apart from Chloe’s more punk preferences its all really kind of a mellow rock sound. I hope they release an official soundtrack. 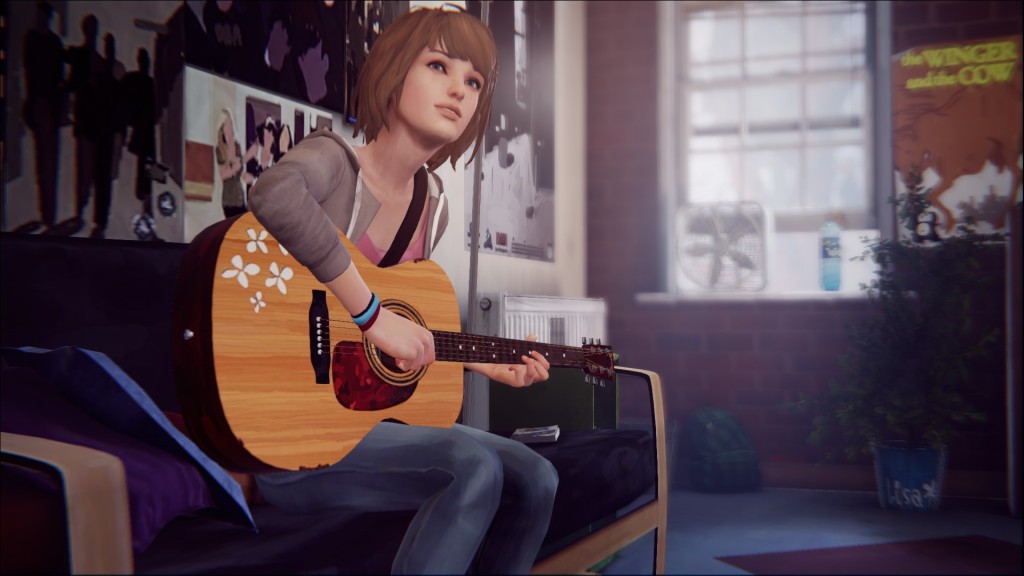 For me so far the only drawback is how the characters look sometimes. The eyes sometimes looks a bit dodgy how they move around….and the hair is very static so it looks strange at times. But honestly overall that is my biggest complaint in this game….everything else about it is gorgeous.

Within the game you also have oportunities to take photos of certain things with Max’s polaroid camera. These photos add up to Steam achievements. Also the game tracks the decisions you make and compares them to the choices other Steam users made. Its pretty cool.

Now I am going to do a seperate post for each episode, but i will warn you now in case you dont like that kind of thing – in episode 3 Max has the option to kiss Chloe. I didnt get a screen grab but I went for that choice. Haha! It was just a cute moment.

Anyway – I will wrap this up for now. I have an assignment due on Friday so I am trying to resist playing Episode 4 until I have submitted it. So instead I decided to procrastinate and make this post! Good times. 😀

← Sleep In Your Car Challenge
EnChroma ~ Science you rock! →

My name is Rebecca.
I have been blogging a long time. I am a very lazy blogger these days.
I still get randomly obsessed with things on a regular basis. Start of 2016 top 3 obsessions are Sterek, Check Please and ice hockey (still going in 2019...hmm also I am playing an excessive mount of minecraft atm).
I may or may not blog about any of these things...the insanity mostly happens on my tumblr now. :D
This error message is only visible to WordPress admins


Error: API requests are being delayed. New posts will not be retrieved.

Error: API requests are being delayed for this account. New posts will not be retrieved.

Make sure this account has posts available on instagram.com.