So last night on tumblr I saw a post that said the following:

To play this game, go to MapCrunch, select “hide location”, make sure you have all countries unselected, and click go. What this will do is drop you in a random part of the world. It’s as if you woke up on the side of a road in an unfamiliar country. The goal of the game is to find your way to an airport so you can return home.

Bonus Hard Mode: No using outside sources, and that includes using google maps to figure out your location from signs or landmarks

I thought it might be fun so I thought I’d have a go. My first starting point was this: 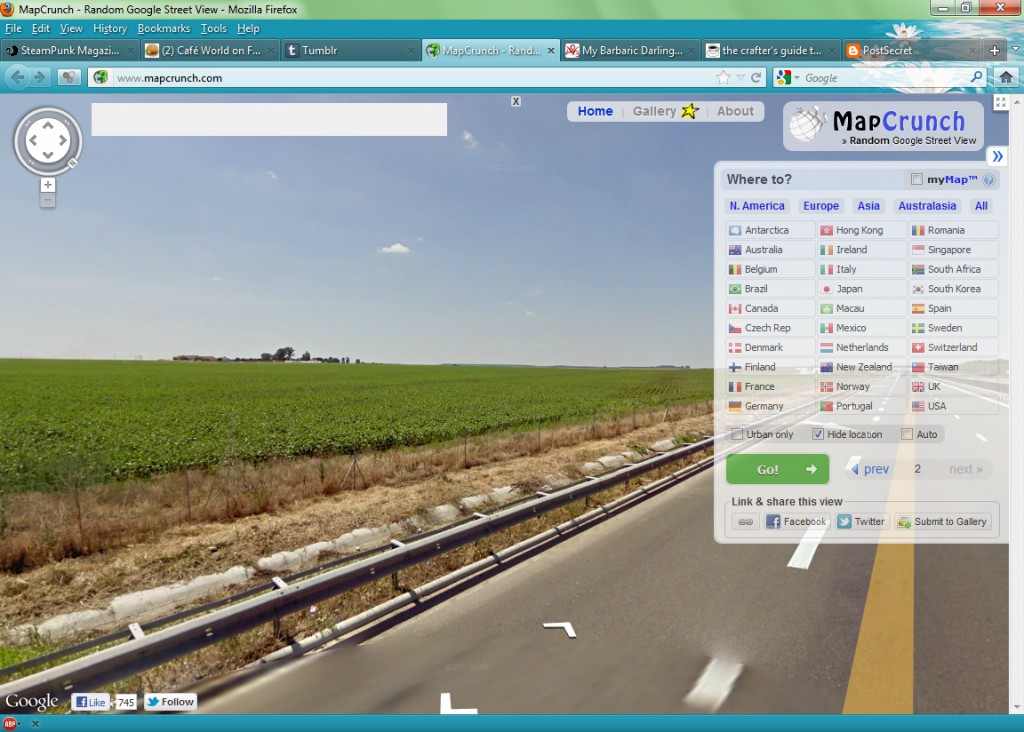 Took me about 10 mins of clicking to find my first sign but it was about a service stop in a language I didnt recognise. A while later I found another one.
I did use wikipedia to look up cities and later to check locations of airports in the countries I was in to try and help guide me a little.
I found a sign in the opposite direction from where I was headed that said Bucuresti which I figured meant Bucharest. So I was in Romania. When i checked a list of airports in the country…the direction i had been heading seemed to have the closer airport, so I kept heading that way.
You can see I started off in quite a rural area so just imagine how much clicking down a motorway it would take to get to a city. I got bored a lot of times but was still popping over to the window with Mapcrunch right up until 2:30am or so when the electricity in my apartment block went out…AGAIN!
So I went to sleep.

When I got home from work today HEAPS of peeps I follow are playing this on Tumblr….and there is loads of jokes going around. Its AWESOME!

So my second attempt when I got home from work landed me here: 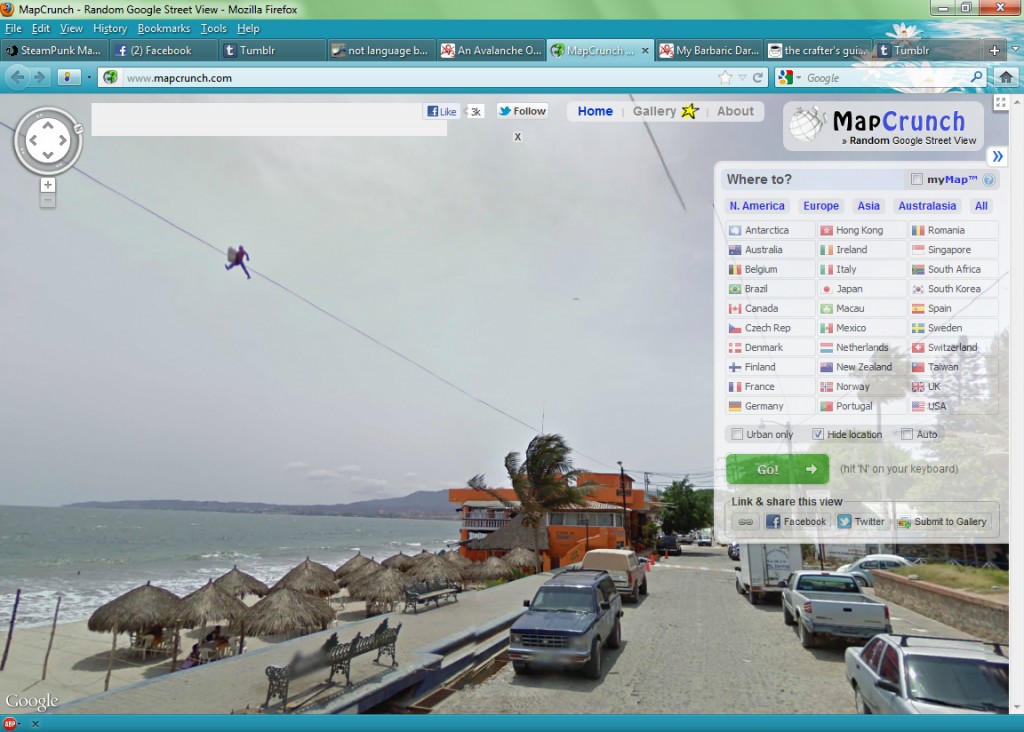 Nice view but what the fuck is that thing up on the wire. Someone else was also landed in the same spot and posted a cropped version of it. 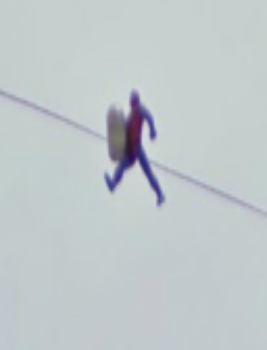 Anyways I quickly established I was in Mexico….I randomly followed a sign and was sporadically clicking along a road for AGES (we are talking hours..while i was checking out new posts on tumblr) till I found some signage for towns and realised there was actually an airport closer to where i started so i turned around and headed back.

FINALLY just a lil while ago i came across a sign saying aeropuerto! 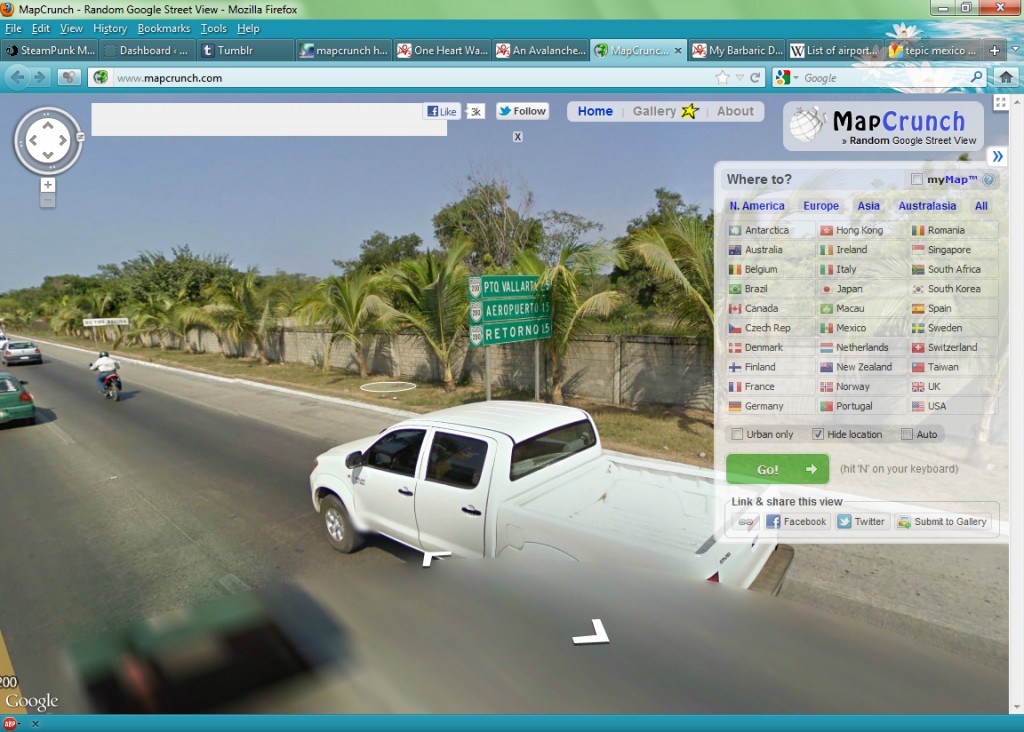 *click click* a bit more and i came to the airport. I refuse to try and figure out whether I was in domestic or international. DUDE – I was at an airport – i will fly to a bigger international one if i have to to escape! I DID IT!!!!!!!!!!!! WOO!!! 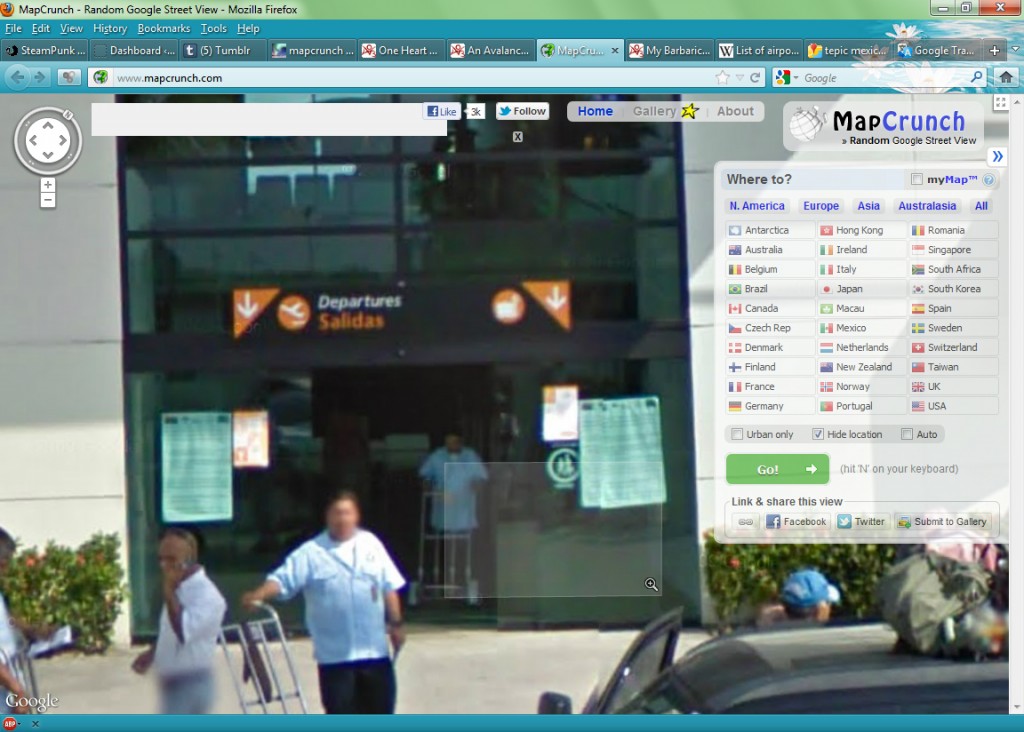 Fun times. Now can I be bothered to try again?????

← I’m sweating like a cornered nun!
Olan Rogers ~ Ghost in the Stalls →

I got my Chirp Book!! Gotta always support any Che

Out to dinner with cousin and her fsmily. Paper on