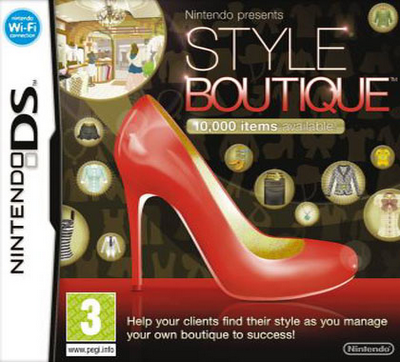 MONKEY CRACK!!!!! Thats what this game is!! I got Style Boutique for the DS on Tuesday and by last night I had already reached what is supposed to be the end point in the game – I’d won all the in game contests. Oops. So now its all about making LOADS of money for my store and aiming to own every piece of clothing/make up/etc in my wardrobe. hmm……

The idea of the game is you run a lil Boutique and you have to go and buy the clothes you stock in your shop and then cute lil anime-looking girls who have different styles come in and you gotta make ’em happy to make a sale. If you do REALLY good they even do a anime-style magical-girl-transformation sequence! LIKE WOAH!! Its got a certain market alright! BUT I LOVE IT! 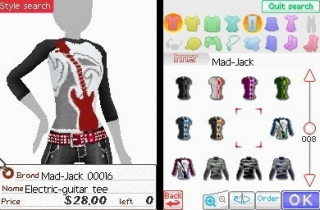 You can also waste quality time dressing up your character. Every piece of clothing you buy to stock your store also appears in your own wardrobe (so I have an alarming number of EGL, punk and just GREEN stuff in my wardrobe). You can also get the characters hair cut in different styles, with interesting colours. My girl had green hair with gold streaks for a while but now its strawberry blonde with some other coloured streak.
So as your store level goes up you can enter these contests and as I said, I finished all the contests in 3 days. It probably would have been sooner but i failed the ‘punk chic’ one the first time. I know how that look SHOULD look but they wanted punk mixed with annoying flowery shite so i failed it the first time around and if you fail a contest you have to wait a day to do it again.

Now whats bugging me is I cant find anything that explains if the Dominic dude (he is the one who funds your store when it starts) is meant to just be some cute boy character for the young girly players to sigh over or if he asks your character out on a date at some point. Does ANYONE know???? His butler hs been ACTING like he wants to set him up but I dunno. Would be amusing.

Dude this vid shows you almost everything you do in the game! Imma stop explaining and let them do it!


Anyhoo – I think in the US its called Style Savvy.

But yeah, popsicle gave me his DS but i think I am still gonna have to buy my own coz this annoying white bar appears on the top screen and covers over important stuff in game which is annoying me. One of my uncles was out from England earlier this week and decided to spoil my bro, sis and me a bit. Now I already had this item at the top of my list of things to buy next payday but now I dont have to coz my uncle got it for me instead!!! ZOMGAWD HAPPEEEEEEEEEE!!!!!!!!!!!!
Mental age is SO not 32 people. 😀

I got my Chirp Book!! Gotta always support any Che

Out to dinner with cousin and her fsmily. Paper on